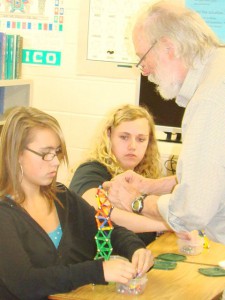 SPEARFISH — Thanks to the Spearfish Foundation for Public Education, students at Spearfish Middle School were able to meet, and learn from an internationally recognized artist who calls Spearfish home Wednesday, Jan. 25.

Dick Termes is well known for his ability to paint a variety of unique designs on spheres, and lately he’s been visiting area schools to provide workshops on how it’s done. Known as Termespheres, examples of his work are on display throughout the world, and he utilizes these workshops as an opportunity to lecture on the interconnections made between math, science and art.

“These one-on-one sessions with classes are so successful because they make the presenter and the ideas they present come to life,” said Liz Manning, co-chairwoman of the Spearfish Foundation for Public Education.

Because of the grant secured by the foundation, Termes was able to provide a lecture to the entire eighth class in regards to his journey as an artist, and how he creates his work. Later that morning, he worked with students in their math classes.

Termes explained that he utilizes geographic formulas and a variety of perspectives to create most of his Termespheres.

“I use a lot of math,” he said “… and I tend to always create a set of rules for each piece so I can capture a total space and illustrate that using the rules of perspective.”

To create a Termesphere can take months – even years. Once finished they illustrate everything from the interiors of historic cathedrals in Europe, to imaginary worlds.

“It’s a really fun area to play in,” Termes said. He provided students with several examples of his creations that can truly play a trick on even the most trained eyes.

So how does he do it?

“ I use a lot of math and a lot of imagination,” Termes said. “Every single piece has a story or shows a variety of parallel worlds in the same space.”

He explained his Termespheres contain a variety of geographic designs created using the rules of six-point perspective. But, most of them have a certain theme tied to them.

Whether it’s a rendition of the inside of the Panthean in Rome, Italy, the intricate details of San Chapelle in Paris, France or simply a beautiful landscape that features places far away or in our very own background — each piece is unique. Throughout the presentation, he showcased examples of Termespheres he’s created over the years, many of which portrayed optical illusions, which really caught the student’s attention.

“I think it is fantastic what he can do with spheres,” said Olivia Smith, an eighth grade student who attended the program. “It’s just mind blowing to see some of his pieces and how detailed they all are.”

“I thought this was a really cool presentation,” she said. “My favorite part was when he told the story behind each piece … the ones with a solid theme were my favorite.”

For more than 40 years, he’s worked to perfect his craft. A graduate from Spearfish High School, he said he was introduced to art while he was still a teenager.

“I still remember when I realized that I had found a medium that made it a lot easier to express myself,” Termes said. “That’s what art is to me … a way to capture something that tells a story, or has some sort of meaning.”

It’s that connection to his hometown that makes his presentations relevant and inspiring to area youth.

“This is a local ‘boy,’ who grew up in the same neighborhoods as these students, playing basketball and baseball in many of the same gyms and field that they inhabit,” Manning said. “And, at the same time, he came to dream of the world in a spherical art form, and has been embraced by artists and mathematicians in America and abroad.”

His studio and gallery is located at 1920 Christensen Rd., in Spearfish. It is open to the public, and Termes said he welcomes anyone to simply stop out and check out the gallery, as it showcases more than 50 Termespheres.

During the one-on-one class lectures, the students utilized hands-on study methods to create three dimensional geometries and were showed how they relate to the world.

He also went into polyhedras, which provided an opportunity for students to learn spatial thinking and connect art and geometry.