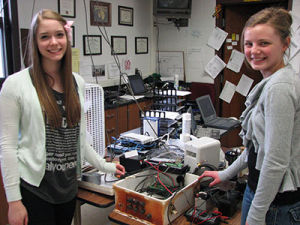 SPEARFISH — All of the students in Steve Gabriel’s science classes at Spearfish High School know about the Sanford Underground Research Facility. But thanks to support from the local school district and the Spearfish Foundation for Public Education, two students are working with Gabriel to do actual research in the world-class science facility.

Gabriel, who tries to apply his classroom lessons in physics and other sciences to the active research going on in the lab right now, is working with two Spearfish High School students to install distributed temperature sensors underground. Ultimately, scientists at the lab hope that the fiberoptic sensors can be used to monitor ventilation in the Sanford Lab. Gabriel said the Spearfish School District bought wind sonic sensors for the experiment as part of its regular “science buy” year in 2012. Additionally, the Spearfish Foundation for Public Education provided a $1,500 F.I.S.H. (Fostering Innovation in the School House) grant that allowed Gabriel to purchase additional equipment for the experiment.

“Last year was a science buy year, and I’ve been using the same lab materials in my room, and I didn’t need lab materials, so I thought this was a good way to bring science into the classroom,” Gabriel said. “You just don’t (typically) have a national lab out your back door. I had an opportunity to work in the field 22 years ago and it was an experience second to none, and I was going to do everything I could to get involved (in research at the Sanford Lab.)” 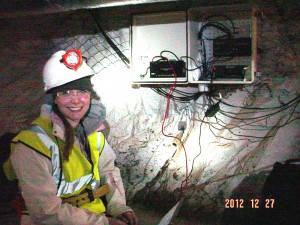 Rachel Crawford, a Spearfish High School senior who worked with Gabriel last summer to get the temperature sensor equipment running before installing it underground, said her time working on the project was an incredible experience. Crawford spent the summer of 2012 working with Gabriel at the Spearfish High School library reading manuals for the equipment, running tests, and working on how to remotely operate the underground equipment from the surface at Spearfish High School. The experience helped her to gain an extra credit for school, and she said it taught her a lot about problem solving and working with computers.

“I was involved with trying to create a website where we could actually get data,” Crawford said. “I learned a lot about computers and connecting and having remote access. Those are probably the things that I retained the most. It was an interesting experience. It definitely was a lot of problem solving and we were trying to figure out how to re-start it when we were still above ground.”

Erica Redinger, a freshman at Spearfish High School, is also starting to learn the ropes of the experiment so she can take the reins on it when Crawford graduates.

“I’m not really good with computers, and science is interesting and I really enjoy it, but I’ve never been hands-on with real science,” Redinger said. “So it’s really cool to be part of it.”

“The thing about science is it is just problem solving,” Crawford added, speaking about what she learned from her experience on this project. “Problem solving is trying to think things through logically and getting frustrated and not knowing hot wo do it, and giving up and coming back to it and trying to fix it again.”

Using the grant from the Spearfish Foundation for Public Education, Gabriel said he was able to double the equipment for the experiment, and measure different areas underground. In December, Gabriel and Crawford ventured 4,850 feet underground to try and split their flow meters in half and move them from the locations of the Big X to the Four Winze Y. Though the move was successful, Gabriel said there is still much work to be done in order to gain remote access of the sensors from the surface.

“My hope is to, within the next couple of weeks, to go down and replace the computer that is down there and hopefully get it online so we can access it from the school,” Gabriel said.

Crawford said she is very grateful to have had the research experience working with the lab. Now, when she is sitting in Gabriel’s class and listening to lectures, she has real-time experience working in the field to relate to, and that makes her lessons more interesting and easy to get excited about. Crawford also said she enjoyed her experience working with officials at the Sanford Lab. While she was underground in December, Crawford said Sanford Lab Science Liaison Director Jaret Heise was able to talk with them briefly about the science going on underground, and some scientists spoke to them about their projects, including the effort to electroform the world’s purest copper underground. Though Crawford said they had hoped to tour the Large Underground Xenon dark matter detector lab, they were unable to because officials were moving liquid nitrogen into that space.

Gabriel said the scientists have a keen interest in the data from the sensors he and his students are installing. Radon gas that radiates from the rock underground can interfere with some of the science experiments, he said. The only way to deal with the radon gas, Gabriel said, is through ventilation. So a project that monitors ventilation underground is extremely valuable.

“I know Mr. Gabriel wants to try and get more students involved,” she said. “He has been talking with our physics class about trying to take students underground. I think that would be really wonderful just because I think seeing real science helps spark interest.”