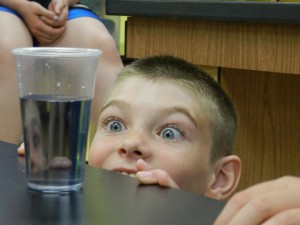 Tough times brought out the best in the community of Spearfish.

The Spearfish Foundation for Public Education was formed in 2005 following the second defeat of an opt-out and with the voting headed in the wrong direction.

The district had gone through cuts in their General Fund budget over a five-year period, due mostly to declining enrollment.

Two School Board members decided to take a different tact, and the Foundation was the result.

Spearfish Superintendent Dave Peters said the Foundation is made up of community members concerned about the loss of educational programs in the district and who are dedicated to the education of the community’s youth.

New ideas and enthusiasm took hold with people who just wouldn’t take “no” for an answer.

“Cuts in programs and staff members, and two failed opt out votes over three years negatively impacted us all,” Peters said. “(The Foundation) has positively transformed the morale of staff in amazing ways.”

Over $50,000 will be contributed this year by the Foundation, funded entirely from donations, to special programs in the Spearfish School District.

“It provides academic programming and opportunities that would not otherwise be available,” Peters said.

Several programs are “permanent” and are funded every school year. Permanent programs include the Elementary Christmas Program, and a pair of reading programs at the K-2 level; after school assistance, Elder’s Wisdom and gifted programming at the 3-5 level; Middle School drama and Science Olympiad programs; and at the High School, We the People, Science Olympiad and a summer science program.

Other programs are supported as money allows and teachers request funding in the form of “Fish Grants.” Twice a year the foundation distributes $50 mini-grants for twenty teachers to use in supplying their classrooms.

The foundation also organizes a community-provided picnic for the district’s 300 staff members at the onset of the school year.

Foundation members are ambassadors in the community on behalf of the schools, provide programs and opportunities for our students they wouldn’t otherwise have and have made a significant difference in staff morale through their support and encouragement.

“The Foundation has served as our hope in our community, and has had an incredibly powerful and positive impact on how our system is perceived and supported,” Peters said.