Inside the World of an Engineer 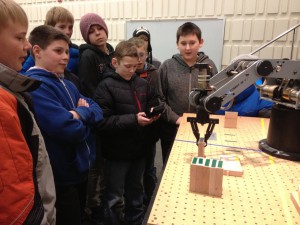 As part of Engineer’s Week 55 seventh grade boys from Spearfish Middle School traveled to the S.D. School of Mines and Technology on February 21, 2013.

Their teacher, Mindy Capp said there were several sessions, in which her students had the opportunity to get an inside look into the world of an engineer. They toured campus and the many science classrooms, observed a chemistry show, and learned about robotics. They even got to run the robot. In the shop, they observed a drone hovering and learned why they are important to us.

In additional, Capp said they learned about hail storms and how they originate as well as underground pollution.

“It was a great day,” she said, adding that the field trip was made possible through the support of the Spearfish Foundation for Public Education. “We want to thank them so much.”

Reprinted with permission by the Black Hills Pioneer © 2013.